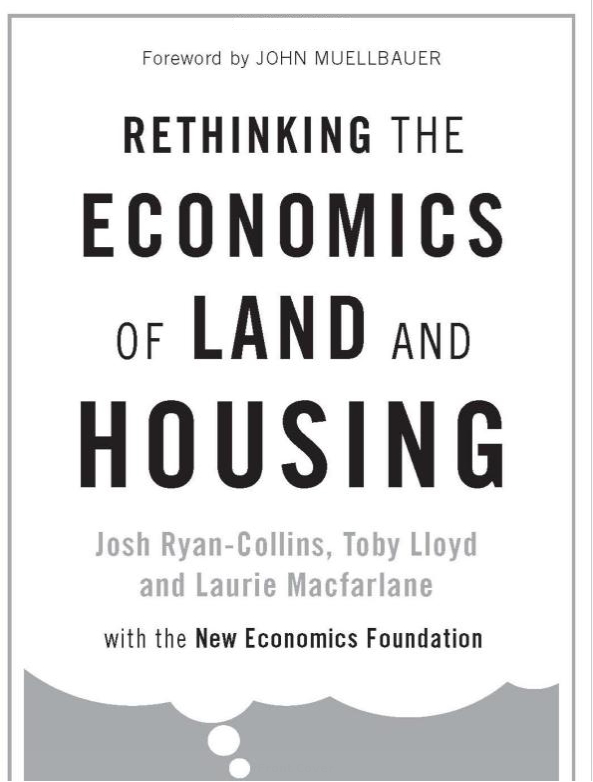 Land tax advocates will find the sections which deal with supply and demand in the housing market a useful summary of economic knowledge. This makes Rethinking Economics a welcome resource to “fact check” the many housing policy proposals. My copy now falls open on page 82. There in black and white are the rates of house building in the UK since 1949. Thus a recent pledge to build 5,000 houses a year over the next 5 years, compares rather poorly with the 350,000 built every year in the 1960s and 70s.

Also welcome is the summary on the relation between land and debt. The authors do a good job of showing how the deregulation of the financial sector has caused instability, unproductiveness and homelessness. Their account provides a temperate alternative to Positive Money’s pioneering work on debt, while being more accessible than a treatise by Joseph Stieglitz.

Also useful is how the authors concisely describe the historical genealogy of competing theories of political economy since Adam Smith. For those not already familiar with Mason Gaffney and Fred Harrison, sections such as “Political reasons for the disappearance of land from political theory”, provide genuinely eye-opening story of how an alternative and fallacious interpretation of the three basic factors of production became economic dogma. Backed by reasonably sound economics, the authors establish a convincing narrative that goes some way to explain the neo-classical perversion of economic science that has caused the housing crisis.

However, the definition of land as “locational space” subtly falls into a reductionist trap set by neo-Classical economics. Any definition of land is inadequate if it does not explicitly account for all the commons, such as communications infrastructure and knowledge itself. As George showed, “Land” is a better term since it refers to the broad shoulders of culture on which we stand, as well as the gifts of nature we are given to work with.

This reductive definition of the central concept of Land reading reveals Rethinking Economics does not have the methodological resources needed to tackle the housing crisis. This is because the housing crisis is a political choice. The authors own findings show this. For example, they state that the “normative element” to Clark’s gloss on marginal utility theory was key to its success. Yet the authors state they will avoid discussion of “moral problems”. But history shows the political success of Marx and George as of Clarke was due to their superior articulation of the moral implications of unjust economic systems.

The reductive, materialist, definition of Land and the accompanying moral uncertainty are both symptomatic of an unstated British Marxism. This is not entirely surprising since the publishers have Marxist roots. It is most noticeable when the authors posit the existence of an intellectual elite who control the system. While there may be powerful interests in society that can influence behaviour, no one can reasonably maintain that these powerful groups can actually determine what people think and do. Conspiracy theories such as these provide easy answers to difficult questions but they do not stand up to intellectual scrutiny. Thus Rethinking Economics cannot explain why land value tax has appeared on all the main political parties’ manifestos, except the Conservatives, and Labour nearly won the election on the basis of its manifesto for economic reform, all of which is presumably against the wishes of the rich and powerful.

The influence of British Marxism also appears in the appraisal of Henry George’s contribution to economics. While the authors give George a central place in their analysis of land and the housing crisis, they blame the failure of land tax to become law on the “failure” of his campaign. Specifically, they cite the failure of “socialist and single tax progressive movements to unite on [land taxation]”. On the contrary, history and logic show it was the British Marxists, following Marx and George Bernard Shaw, who failed to grasp the simple justice of the Single Tax, the errors of their own economic philosophy apparently not clear to them at that time, and who called Henry George a “traitor”.

Thus, while attempting to present an unbiased account of the housing crisis, the authors incorporate old political prejudices with methodological weaknesses which undermine the integrity of their insights, if not the nobility of their motivations. It is disappointing that these promising economists have not learnt from Henry George’s attempt to rescue the discipline of political economy from the sophistic blunders of neo-classical economics, nor from the great failings of Marxism.

Nature and the Common Good